Mr. C’s talent in 4K UHD and blu-ray, the review

The review of Mr. C’s talent in 4K UHD and blu-ray: Eagle has churned out a beautiful steelbook complete with a booklet for the film with Nicolas Cage playing himself. Top audio and video, good extras. Mr. C’s Talent: Nicolas Cage and Tiffany Haddish in a scene from the film

It has just been out in streaming for two weeks, but now it’s home video time for the irresistible action comedy starring Nicolas Cage who plays a parodic version of himself in an intelligent and self-deprecating way. The best way to immediately enjoy an unmissable film in the cool of your home that has already garnered critical acclaim, in which between gags, rhythm and action Cage also has to contend with a double from the nineties, critical of himself in the present. And as we will see in the review of Mr. C’s talent in 4K UHD and blu-raythe film written and directed by Tom Gormican received a truly lavish treatment from Eagle Pictures, and we had the honor of admiring the most prestigious edition. 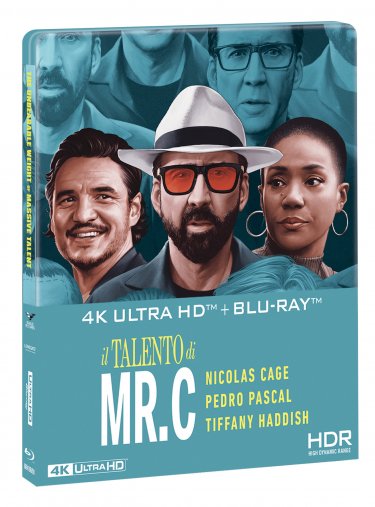 As mentioned, Eagle Pictures’ treatment of Mr. C’s talent is truly luxurious. In addition to the various DVD, Blu-ray and 4K UHD editions, in fact, there is also a fabulous Steelbook, which is precisely what we have been able to analyze. The metal box is really beautiful in its original look that enhances the figure of Nicolas Cage. Inside two discs, one with the 4K UHD version of the film, the other in the blu-ray version, which also contains the many extras including some deleted scenes. But there is also another surprise, namely an original booklet 20-page collector’s item entitled “Everything you don’t know about Nicolas Cage”, containing the main curiosities about the famous actor told through his most famous films.

The exterior of the steelbook of Mr. C’s talent and the cover of the booklet

Excellent video, rich chroma and great detail even in the CGI 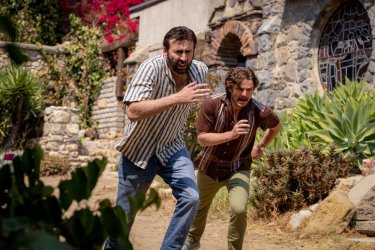 The talent of Mr. C: Nicolas Cage, Pedro Pascal in a scene from the film

And then of course there is the technical part, as excellent as the package. Starting with a 4K UHD video that improves the already excellent blu-ray vision (still excellent for the format) thanks to a razor-sharp picture and an even more refined detail. The chromatic palette is also decidedly richer and is always kept on warm tones and is evocative in the Majorcan sequences where golden yellow shades prevail. Also noteworthy is the splendor of the waters and the perfect texture of the cliffs, with some spectacular plays of light and colors that remain bright but never exaggerated. Formidable as mentioned also the detail, from the settings to the panoramas up to the clothes and the close-ups, with some tricks on Cage, even the CGI one to rejuvenate it, in good evidence and very effective. 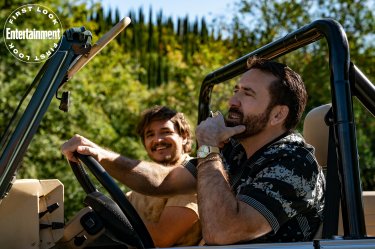 The Unbearable Weight of Massive Talent: A photo from the film

As for the audio, we find the tracks DTS HD 5.1 both in Italian and in English. As for the first part, we are certainly not faced with an animated film but you can appreciate the quiet environment, capable of capturing even subtle noises with good directionality, the perfect dialogues for timbre and cleanliness and the body of the soundtrack. Then when the film changes gears and the action scenes arrive with shots, explosions and roaring vehicles, the rear axle also makes a more marked and energetic contribution, giving power and a good general spatiality, but also the subwoofer does not disdain to be feel with some pretty muscular bass. In short, an audio that does his duty entirely, without exaggeration but always leaving the viewer well immersed in the events.

From Pig to Mr C’s Talent: we explain why Nicolas Cage is a great actor

The extras: 50 minutes of insights, curiosities and deleted scenes The talent of Mr. C: Nicolas Cage, Pedro Pascal in one scene

And the special contents do not disappoint either, with almost 50 minutes of contributions. We begin some featurettes, starting from La Mente (6 ‘and a half), dedicated to the director and screenwriter of the film Tom Gormican that Cage nicknamed The Mind. It continues with Barlumi of a Cage from the past (5 ‘) with Gormican himself and co-writer Kevin Etten talking about the actor’s skill and the CGI used to put the young Cage in the same scene with the more seasoned one. The talent of Mr. C: Pedro Pascal in a scene from the film

We then find Everyone Needs Javi (4 ‘) on the superfan character, while Nick, Nicky and Sergio (4’ and a half) offer a fun insight into the various Nicolas Cages that appear throughout the film. Then go on with Action in the second act (7 ‘), dedicated to the change of register of the film which in the second part becomes an action, then 5-star Cage (2’) with some unlikely and hilarious auditions for being Nic Cage. Then we find two deleted scenes (with optional audio commentary), 5 minutes in total, and at the end the trailer and Questions and Answers at the SXSW Film Festival (16 ‘), with cast and crew talking with the audience at the Austin Festival.

At the end of the review of The talent of Mr. C in 4K and blu-ray, we reiterate the amazement for the treatment that Eagle has reserved for the film, with a wonderful steelbook also enriched by a 20-page booklet entirely dedicated to Nicolas Cage. The product is also remarkable on a technical level, with a convincing video for detail and chroma and a very engaging audio. The section dedicated to extras is good.

The steelbook is really beautiful. Nice and original the booklet dedicated to Nicolas Cage. Video and audio are of excellent technical quality. The extras sector is good and varied.

Wanting to nitpick, perhaps there was room for some further study on the film.

One Piece, new film coming in 2022: here are the first previews

She-Hulk: Chris Evans comments on the post-credit scene from the first episode