The review of Thirteen Lives, a film based on a true story: the rescue of a team of Thai boys who were trapped for 18 days in a cave. Great cast, led by Viggo Mortensen. Thirteen Lives: A Moment of the Film

On June 23, 2018, 12 boys between the ages of 12 and 17 plus their coach (when numerology is said to be superstition!) Were trapped in Thailand’s Tham Luang cave, leaving the world in suspense. Went there after a football match, they got stuck due to monsoon rains, with the water level constantly rising. The rescue operations gradually involved more and more people, including the tourism minister, Navy SEAL, divers and, eventually, even an anesthetist. After the film The Cave (2019) and the documentary The Rescue (2021), Ron Howard’s film arrives on Prime Video on August 5: the review of Thirteen Lives it is, like his film, a hymn to human collaboration. Thirteen lives: a scene from the film

It is understandable that a story like this has struck the imagination of many artists. Thirteen lives, moreover very young, trapped at the bottom of the earth and in the darkness it is a very hard, almost infernal image. It is in these moments that human beings, despite daily differences and disagreements, put aside the differences that divide and collaborate, making use of every resource of human ingenuity. A director like Ron Howard could not miss a story like this: if we look at his filmography we notice that it is full of real events and people, often caught while they are confronted with the unexpected that tests their skills.

In Thirteen Lives Ron Howard focuses primarily on the efforts of the rescuers. In two hours and 20 of film he shows how the machine of human society is extremely complex. Politics, faith, science come together to try to do something extremely human. In a period like this, in which the world has been tested by two and a half years of pandemic and war, a story like this does not just tell the facts, but becomes an encouragement. 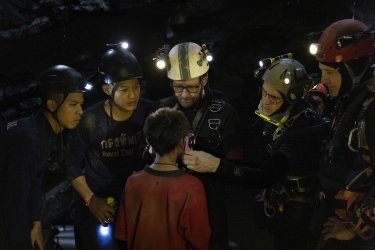 Thirteen Lives: An Image from the Film

With wisdom and craft Ron Howard reconstructs the facts in a crystalline way (in writing there is William Nicholsonm screenwriter of The Gladiator), but does not give in to easy rhetoric. Also because there is no time: the whole film is built with a constant tension, which increases as the days of the children stuck in the cave increase.

In addition to showing the bureaucracy and solidarity of the people, Thirteen lives also questions the decisions of the individual: each of the protagonists questions himself, wonders what he is willing to do to succeed in the enterprise. The nice thing is that, by combining everyone’s skills, in the end a solution can be found.

Ron Howard: “Pavarotti, his life was like an opera” Thirteen lives: a sequence from the film

In addition to a high-level technical sector (photography and sound are well-finished), the film can count on an excellent cast, led by Viggo Mortensen, who plays the diver Rick Stanton. Then there are Joel Edgerton in the role of Harry Harris, an anesthetist, Colin Farrell in that of John Volanthen, another diver, and Tom Bateman, a diver expert in cave exploration. Their faces are perfect: for Ron Howard and his film they lose all Hollywood shine, turning into normal people, marked by fatigue and worry. They don’t have time to think, they have to act. Much of the film’s strength is their chemistry on the big screen. This story has been told several times, two hours and 20 are a lot, but the humanist spirit with which it tells it Ron Howard does not leave you indifferent. It is not a question of doing good, but of celebrating the strength of the human spirit. And this is precisely what interests the director: the boys remain in fact figures in the background. The tragedy itself is in the background. What interests him is how he reacts to the tragedy. The effect is therefore more stimulating than cathartic: the director believes, or wants to believe, that each of us, if put to the test, can bring out the best part of himself. This is the brightest and best part of the American Dream and yes, on screen at least it’s good for the heart. Especially in this historical moment.

As written in the Thirteen Lives review, Ron Howard tells the true story of the Tham Luang cave accident in Thailand. 13 boys were stuck underground due to a flood. It took 18 days to get them out. The director focuses on the rescue team, celebrating the spirit of collaboration and human ingenuity. The cast is level: Viggo Mortensen leads the younger Colin Farrell, Joel Edgerton and Tom Bateman.

The cast: Viggo Mortensen and the others are great. The curation of photography and sound. The construction of tension.

Two hours and 20 are a long time and could discourage some spectators.

NCIS 20 in Italy: release and previews

Dave Bautista could be the protagonist of Unleashed

Dave Bautista could be the protagonist of Unleashed

Production is looking for an actress for the role of Kate

Unfinished series are the main problem of the platform