Grand finale with luca Barbareschi and the video greeting by director Roman Polanski for the Love Film Festival 2022.

Love Film Festival 2022 concludes the eighth edition, dedicated to the theme of justice, with video greeting by Roman Polanski a gloss of the many events and guests who took turns in the magnificent Palazzo Priori, in Perugia. A festival that is undoubtedly growing and that has found its own specificity, creating a mix of fun and reflection on the times in which we live.

In addition to Madalina Ghenea, who returned to Perugia as Honorary President, all the guests enthused the audience and in turn transmitted great appreciation for being in such a beautiful setting as Perugia: starting with Don Most, the legendary Ralph Malph of Happy Days, who attended the opening ceremony, presented his film Moola and finally performed in a singing performance, up to Luca Barbareschi who was the protagonist of the closing event of the Festival: the screening of The officer and the spy, which the director of the Festival Daniele Corvi called “one of the best films ever made on the subject of justice”.

Luca Barbareschi, producer and actor of the film, cited the problems that Italian cinema faces from a production point of view, stating that our country has potential in content that is not used to the fullest, and that an Italian narrative is fundamental especially in response to massive imports from overseas. Barbareschi continued by reiterating his commitment as a producer to spreading Italian and European culture, and affirming that the struggle takes place between politics and art, between the idea of ​​power and the power of ideas. Finally, he concluded by underlining how fundamental the Film Commissions are to ensure that Italian contents acquire real importance for the country.

Finally, before the start of the screening, the director of the film Roman Polanski greeted the audience of the Festival in connection.

The rich program of the three days in Perugia also included a conference on legality, which was also an opportunity to present an event closely linked to this theme: the VI edition, which this year takes place in Perugia, of the National Forensic Basketball Tournament ” Together, not to forget “, in memory of the 2015 Milan Court massacre, where the young Lorenzo Claris Appiani died. In this context, Madalina Ghenea received the solidarity award dedicated to Lorenzo and given to her by her parents. 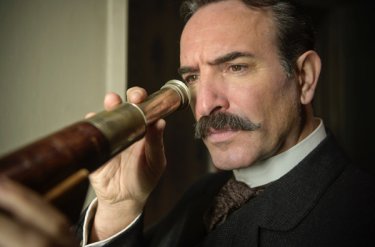 The officer and the spy: Jean Dujardin in a scene from the film

Again, among the films screened, “The Gospel according to Matthew” by Pier Paolo Pasolini, introduced by Fabio Melelli, “Soldato sotto la luna” by Massimo Paolucci, with the actor Daniel McVikar (the unforgettable Clarke of Beautiful) in connection, the making of the film “Men from the sidewalk” by Francesco Albanese, “Criminals becomes” by Luca Trovellesi Cesana and Alessandro Tarabelli, the documentary “Hostages: Augusto de Megni”, by Alessandra Bruno, a very important story for Perugia which is was the protagonist. Space also for literature with the preview presentation of the book “Il sorpasso d’Italia” by Gerry Guida and Fabio Melelli, and “Pentcho”, a book by Antonio Salvati inspired by the true story of a group of Jews fleeing along the Danube, another act of collaboration between the Festival and the Umbrian Bar Association. Here, too, writing becomes a means of getting closer to the truth.

Daniele Corvi, Director of the Festival, said in conclusion: “It was the revival edition. The turnout and feedback from the public, as well as the enthusiasm that has been created around Don Most and the other guests has certainly enriched a Perugia that was colored with a “red love” as a testimony to the love for cinema. Polanski’s contribution was also a wonderful gift for the Festival and the city. Combining the seventh art with a delicate theme such as that of justice , it was not easy, but the results were surprising and there are many reflections to keep alive in mind. Particularly exciting was the presentation of the award for solidarity to Madalina Ghenea by the Claris Appiani family, to them and to all the legal operators present goes our heartfelt thanks. “

Only Murders in The Building 2, the review

Only Murders in The Building 2, the review

Amanda Seyfried reveals the discomfort she felt in shooting some scenes