Spider-Man: Across the Spider-Verse, the preview from Annecy 2022

The directors of Spider-Man: Across the Spider-Verse premiered some sequences during the 2022 Annecy Festival. 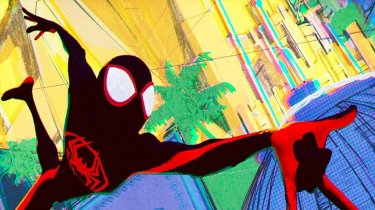 Spider-Man: Across the Spider-Verse: a scene from the film

On June 2, 2023, it will be released in American theaters Spider-Man: Across the Spider-Verse, a sequel to the 2018 Oscar-winning hit animated film. And to talk about this highly anticipated film, Sony Pictures Animation took advantage of the prestigious showcase of the Annecy Festival, one of the main world events dedicated to animation. Inside the Grande Salle, a prime location for big previews (Illumination, Disney / Pixar, etc.), the three directors of the sequel – Joaquim Dos Santos, Kemp Powers and Justin K. Thompson – shared clips (all in various stages of production) and test material, promising something conceptually and visually insane: “If in the first film it was others who visited the world of Miles Morales, now it is he who goes into the other dimensions, each with its own specific aesthetic style.” To be exact, six parallel universes are planned here, and adding up both sequels (the third chapter, Beyond the Spider-Verse, will be released in March 2024) there will be 240 different characters.

Spider-Man: A new universe, an image of Gwen Stacy

After a video message from the producers and screenwriters Phil Lord and Chris Miller, busy with the processing of the two films, and the screening of the teaser, we got to the heart of Spider-Man: Across the Spider-Verse with the opening sequence of the film , centered on Gwen Stacy. She has a complicated relationship with her father, cop George Stacy, who is convinced that Spider-Woman (aka Gwen) killed Peter Parker. The film begins with her trying to defeat the Vulture, finding herself again involved in a multiversal mess with two new allies: Miguel O ‘Hara, aka Spider-Man 2099 (seen in the post-credits of Spider-Man: A New Universe). , and Jessica Drew, another Spider-Woman (who remains in action despite being five months pregnant). The directors also confirmed the original cast for these roles: Hailee Steinfeld and Oscar Isaac return to lend voices to Gwen and Miguel, while George and Jessica are Shea Whigham and Issa Rae respectively.

Spider-Man Review: A New Universe – The best Spider-Man ever is animated

Spider-Man: A new universe, a sequence from the animated film

Commenting on the visual approach of the film, the directors explained that for each variant of Spider-Man (or Spider-Woman) they went back to the original comics: in particular, Gwen’s universe takes up the style of her first appearances, where the stroke and the colors reflected the different moods of the protagonist, an effect that will manifest itself on the screen with a new software capable of simulating the use of watercolors (the three filmmakers underlined the commitment of the Sony Imageworks staff, which continues to experiment with new technologies to enrich the formal apparatus of the two sequels). For Miguel, on the other hand, the troupe was able to make use of the consultancy of Rick Leonardi, the historic designer of the first title of the character, published between 1992 and 1996. Therefore, some effects related to the chromatic nuances of the costume when the superhero of 2099 is moving they will be directly from the sack of one of its creators.

Spider-Man: A new universe, guide to all incarnations of the character

The importance of being Miles Morales

Spider-Man: A New Universe, Miles Morales is one of the new superheroes

“We haven’t forgotten that the reason everyone loves the first movie is that it’s Miles’ story first and foremost,” explained Kemp Powers introducing the second extended clip, where the young protagonist arrives late for a conversation with his parents and principal. high school to talk about his future. A sequence that effectively incorporates Stan Lee’s philosophy on superheroes with super problems, and which led to the real big announcement of the presentation: the identity of the main villain of the film. “Miles was running late because he was facing a new villain, first appearing on screen. Want to know who he is?” The directors asked. Well, it is Spot (Macchia in Italian), one of the lesser known antagonists in the comic history of Spider-Man, outside the circle of loyal readers. He was chosen because of his powers: his body is covered in black patches that he can use to open interdimensional portals. He will have the voice of Jason Schwartzman, and even in his case the aesthetic factor is important: his appearance of him will change over the course of the film, going from a kind of incomplete drawing to something more disturbing, as he learns to control the he skills him. And with this the meeting ended, with more details expected in the coming months, before the film hits theaters next summer.

Spider-Man: Across the Spiderverse: La Macchia in action

“It’s nice to be a fathers disinterested”

Knives Out 2: Rian Johnson’s sequel will be titled Glass Onion

Knives Out 2: Rian Johnson's sequel will be titled Glass Onion

Anthony Hopkins in the cast of The Son, directed by Florian Zeller

“We were very lucky if I will show the baby on social media? We’ll see!”