The review of the fifth episode of Moon Knight, where (almost) all the knots come to a head within the complex psyche of Marc Spector. 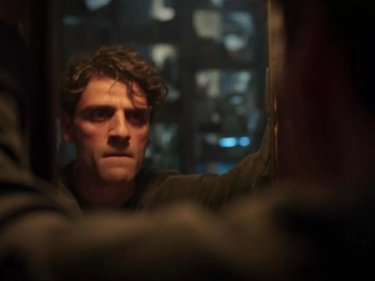 We’re almost there: with the Moon Knight 1×05 review we arrive near the terminus for this debut of the tormented Marvel character on Disney +, and we are in the presence of the episode which, most of all, clarifies why a miniseries rather than a feature film was more effective to introduce Marc Spector and his weird alter ego. The penultimate chapter, in fact, is the one that more than the others digs into the deepest recesses of Spector’s chaotic mind, taking the times that the cinema would hardly have granted, especially considering that so far we have had to deal with only two of the many personalities of the mercenary. (the fourth episode suggests that we will see a third, but at this point it is logical to assume that it will perhaps only be to lay the foundations for the future of Moon Knight within the Marvel Cinematic Universe).

Journey to the afterlife

The fourth episode of Moon Knight ended with Spector dying, suddenly transported to a sort of interregnum shaped like a psychiatric hospital, with him and Steven in separate bodies and welcomed by Taweret, an Egyptian deity who protects mothers and children and has the head of a hippo. It is up to her to ferry them to life after death, but to be able to access it, their hearts must be weighed on a special scale. From there it emerges that the two personalities are incomplete, and so Marc and Steven begin to go backwards, discovering the origins of Spector’s multiple personalities and how he became Khonshu’s avatar during a mission to Egypt. While all of this is happening, Marc periodically returns to his “analyst’s” office which is actually a manifestation of Arthur Harrow, who has begun to implement his plan in the world of the living. Will Marc and Steven be able to reach the right compromise to return to Earth and defeat him?

Moon Knight, review of the fourth episode: the mysteries of the tomb

If in our reviews of the previous episodes we had expressed a bit of skepticism about the decision to entrust the two final chapters to Mohamed Diab, here we can pleasantly declare ourselves contradicted: the Egyptian filmmaker, who has agreed to meet Marvel precisely to make sure that the his culture was represented correctly on the screen, proves that he has been eagerly awaiting this moment, diving into Egyptian mythology with relish, between Taweret, the Duat and the test that Spector must pass to reach the final destination. It is a journey that keeps its identity distinct but – albeit subtly – alludes to the cosmogony of the Marvel Cinematic Universe, confirming that there are various versions of the afterlife within the franchise (the most striking example is the one seen in Black Panther, where T’Challa converses with his ancestors). An afterlife that is seductive and terrifying, reconnecting to the partial horror imprint of this project, which, net of some inevitable moments of lightness, is perhaps the one that most distances itself from the light-hearted reputation of the cinematic world of the House of Ideas.

Moon Knight, Oscar Isaac: “My character has a lot in common with Neo from The Matrix”

And to contribute enormously, in this sense, is Oscar Isaac, who despite having always had the lion’s share in the course of the miniseries here is the true absolute protagonist, relegating the albeit valid Ethan Hawke to a corner (almost literally) to have a long conversation with himself (an effect mostly achieved without CGI or other optical tricks, as Isaac’s younger brother, Mike Hernandez, is also an actor and has been a stunt double for several scenes where the two identities appear together). Or rather, in this case Taweret asserts himself as a respectable side character, as opposed to other figures who in the previous episodes were similar to the extras, but the emotional fulcrum remains the double performance of Isaac, perhaps the most poignant of all. the franchise for how he is given the space to delve into Marc’s inner wounds and their devastating effects on the protagonist’s fragmented psyche. In his own way, an important milestone before the final, also sealed by the flashback in which Khonshu says the phrase that had not yet been said: “Become my Moon Knight.” No sooner said than done. And now the conclusion is awaited.

We close the Moon Knight 1×05 review, pointing out how this penultimate episode clarifies everything in a dramatic and poignant way, and also sets the stage for a potentially epic ending.

Oscar Isaac is increasingly phenomenal in the dual role of Marc and Steven. The aesthetic of the Egyptian afterlife is stunning. The deepening of Marc’s past is poignant and painful.

Those who prefer the more classic Marvel adventures may not appreciate the introspective journey.

Another truth, setting and location

Another truth, setting and location

Sanremo 2022, Morgan thunders against Amadeus and proposes himself as Artistic Director