Hotel Transylvania: A Monstrous Exchange, the long-awaited sequel to the animated saga, debuts exclusively from today January 14, 2022 in streaming su Amazon Prime Video for all users subscribed to the service!

Dracula and his gang are back like you’ve never seen them before in Hotel Transylvania: A Monstrous Exchange. Reunite with your favorite monsters for an all-new adventure that sees Dracula (Brian Hull) on the most terrifying mission ever. When Van Helsing’s (Jim Gaffigan) mysterious invention “Transforming Ray” goes haywire, Dracula and his monster friends are all transformed into humans, while Jonathan (Andy Samberg) becomes a monster! 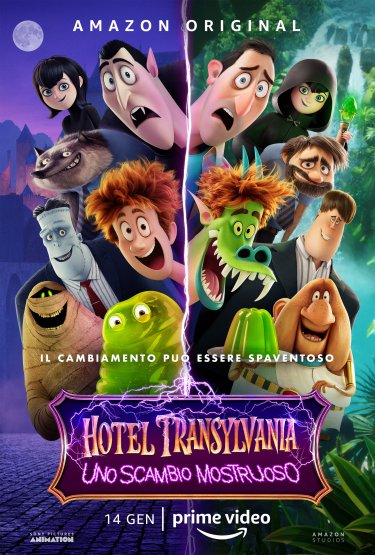 In their new guises, Dracula, stripped of his powers, and an exuberant Jonathan, enthusiastic about life as a monster, must team up and travel around the world to find a cure before it’s too late, and before driving each other mad. With the help of Mavis (Selena Gomez) and Dracula’s hilarious human gang, the mission is to find a way to get back before their transformations become irreversible. The voice cast of the film also features Kathryn Hahn (Ericka), Steve Buscemi (Wayne), Molly Shannon (Wanda), David Spade (Griffin, the Invisible Man), Keegan-Michael Key (Murray), Fran Drescher (Eunice) , Brad Abrell (Frank) and Asher Blinkoff (Dennis).

Big Brother Vip, Kabir Bedi forced to sleep in the living room alone, the indignation of the web

The House, the review – Movieplayer.it

The House, the review - Movieplayer.it

The Paradise of the Ladies 7, Martha and Teresa return?

“Soleil Sorge will never be a friend of mine”