Other fathers, the review

The review of Other Fathers, Mario Sesti’s first fictional film, on the consequences of the end of a marriage. 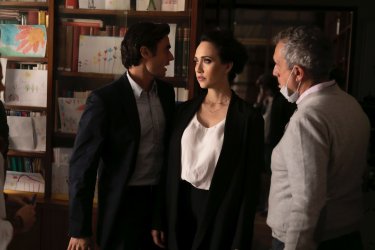 Other fathers: Chiara Francini and Paolo Briguglia on the set

The review by Other Fathers, film drama that had its world premiere at the Turin Film Festival, in the Out of Competition section, before being released as a three-day event between 13 and 15 December, transports us to the first fictional universe brought to the screen by Mario Sesti, well-known film critic and festival collaborator (always one of the important names of the Rome Film Fest, where he curates retrospectives), as well as the author of various documentaries on the seventh art and its great Italian names, from Fellini to Pasolini passing through Paolo Villaggio and the mythical comic mask of Fantozzi. Here, grappling with a story invented from scratch and with actors not coming from archival material, he collaborates on the screenplay with Gianluca Cerasola, elaborating the theme of marital separation and domestic violence in a mystery / procedural key and starting from one idea with strong implications: and if, in this case, net of the faults of both sides, the victim of the abuses was man? 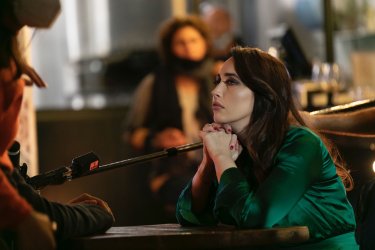 Other fathers: Chiara Francini in a photo from the set

Other fathers focus on the figure of Giulio (Paolo Briguglia), who separated from Annalisa (Chiara Francini) after having discovered her adultery. Forced to live in his own car, Giulio can no longer even see his children because she, eager to go and live and work in the United States with her new partner (which Giulio opposes for obvious reasons), has obtained a restraining order. accusing him of violent behavior towards children. Soon after, he is arrested because the police find a considerable amount of cocaine in his car, and his legal record does not work in his favor. Within the walls of the Rebibbia prison, he begins to weave social ties with the surrounding world, while outside the suspicions arise that perhaps someone has tried to frame him, and consequently who was initially ready to brand him as an ordinary criminal finds himself to question the beliefs of the past.

Cinema at MAXXI 2021, Mario Sesti speaks: “The world has changed, but the desire for cinema has increased” 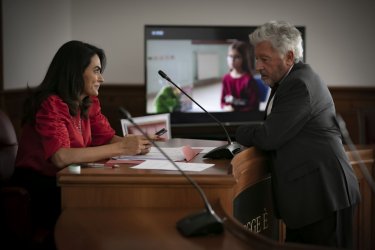 Other fathers: Maria Grazia Cucinotta and Antonio Catania in an image from the film

Mario Sesti and Gianluca Cerasola construct the plot according to the logic of genre, placing the pain of separation at the center of a mystery and transforming it almost into a MacGuffin, a term that in the Hitchcockian meaning indicated something altogether irrelevant as an entity in itself (concept best expressed in Mission: Impossible III, where we never find out exactly what the infamous Hare’s Paw is that the antagonist wants to get hold of). And this is how trauma is treated in the film: it is a gimmick, an excuse, a starting point to show off one’s knowledge of the visual codes of the crime movie, between aseptic interrogation rooms and oppressive prison settings. And equally aseptic is pain, theoretically the central pivot of the film but always and only told in words and never really lived, in the context of an aesthetically elegant but cold and detached story, where the emotional component is reduced to a topic of conversation. 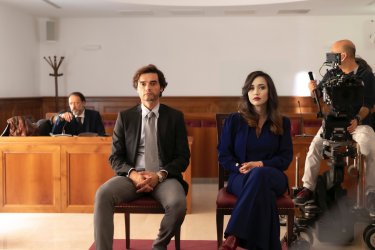 Other fathers: Chiara Francini and Paolo Briguglia in a photo from the set

Above all, the two directly affected on the screen are penalized, in particular Chiara Francini who, due to script requirements, has a smaller presence and therefore less material available to build her own character. Briguglia, theoretically benefited as a central element of the film, finds himself equally on the high seas because, despite the evident commitment he puts into it, the emotional and intellectual layers of his performance remain on the surface, buried by a direction that neglects the human factor even though wanting to explore a sensitive topic such as domestic violence in a more complex way than usual. In the end, there is only one package left to look at, while there is not a little unoccupied space inside, despite the potential of the premise.

We close the review of Other fathers by underlining how Mario Sesti’s fictional debut re-elaborates the theme of marital separation in an elegant but cold way through the filter of mystery and judicial dramas.

The procedural approach gives the operation a certain formal gender dignity. The actors all work hard. The basic idea is full of interesting ideas …

… but the cold and detached execution leaves them almost entirely unresolved, especially as regards the emotional factor.

Which Disney villain are you? Find out with this QUIZ

Audrey Diwan, director of Anne’s Choice, and the sentence on abortion in the USA: “It seems a dystopian reality”

Alec Baldwin, was the gun of tragedy on set used off set?