Tearing along the edges, Zerocalcare does not rule out a second season 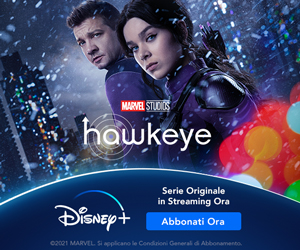 Tear off along the edges, the series based on the comics of Michele Rech, aka Zerocalcare, may have a second season. In the wake of the immense (and deserved) success achieved by the first season (recognition that is also arriving abroad: this is how the series was received in other countries), the cartoonist does not rule out that there may be a second season. In this article we talked about the many easter eggs inspired by the poo culture present in the series, while here we talk about the (sterile) controversy over the language used by Zerocalcare.

Interviewed by Messenger, the cartoonist has not ruled out that, in the future, there may be a second season of Tear Along the Edges.

Since the series came out, my life has become so unlivable that either I find a centering, or I don’t want to be engulfed in the midst of controversy. There is nothing in the world that forces me to do this. It’s up to me. Anyway, if I find a way to survive, I’m going to do the second season too.

At the moment it is premature to hazard a prediction, but when a series achieves the success that that of Zerocalcare is having, we all begin to expect a sequel, sooner or later. The fears that a small masterpiece could be ruined by pushing the accelerator too hard on new seasons come later. Zerocalcare does not completely rule out that there may be a second season, but at the current state of affairs he is probably more interested in enjoying success that the landing on Netflix has entailed, that to think about the future of his series.

Tearing along the edges has now become the series that symbolizes its author’s generation, that is, those “young people” who are not very young but not very old, looking for their place in a world that is often hostile and incomprehensible. Regarding its audience, thanks to Netflix significantly enlarged compared to comics, Zerocalcare observes:

I think the people who recognize themselves in my comics are the ones who are the most meddlesome. My characters speak little to resolute people. Obviously ours is a meddled generation.

An important part of Tear Along the Edges narrative narrates the childhood of Zerocalcare: the expectations of adults of him, his anxieties, the first appearance of his consciousness in the form of an armadillo. With regard to children, the author stated:

I find it funny that they follow me. I wonder what’s coming to him. Some themes are very adult. But it is true that that sense of anxiety about disappointing the teacher I talk about in the series I felt myself as a child. And I wanted someone to tell me not to worry, that if you do badly at school it won’t break the teacher’s heart.

Zerocalcare also premiered his new work, a comic that, as in the style of the artist, intertwines social and political themes, Nothing new on the Rebibbia front.

It is a collection of comics drawn in the past and published in some newspapers, with the addition of an unpublished story that tells the behind the scenes of the series. It will be a story about Iraq.

The series: presented at the Turin Film Festival 2021 the series based on the film of the same name by Phaim Bhuiyan

Is the message of the film trivial or of extreme necessity? Director Kenneth Branagh answers

Quentin Tarantino, that’s when his new book Cinema Speculation will be released

“Seeing each other again is nothing new ..”